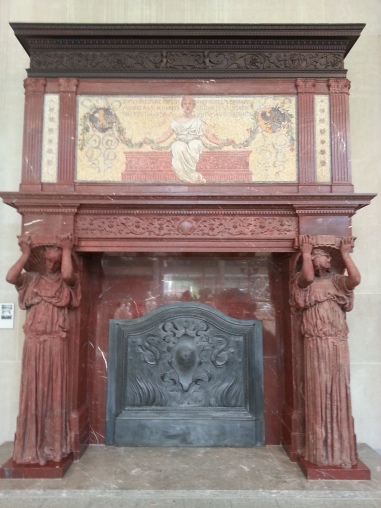 The Metropolitan Museum in New York is unquestionably one of the best museums in the world (and one of the three largest) and I always find it super hard to process the countless unbelievable pieces throughout all the exhibits. But one of my favourite exhibits is The American Wing which is comprised of many incredibly beautiful pieces from The Gilded Age (think Gatsby). One piece that’s always fascinated me in this Vanderbilt mantelpiece, which originally dominated the entrance hall of Cornelius Vanderbilt II on 5th Avenue & 57th Street. The famous mansion (really an American castle) was, and is still to this day, the largest house ever constructed in New York. It was dismantled and demolished in 1925 and the property is now the legendary store Bergdorf Goodman.

The mantelpiece was donated to the museum by Mrs. Cornelius Vanderbilt after the demolition. And it’s huge (15’ h x 12’ w x 3’ d) – you can basically walk right in. The artist, John La Farge, created the lavish structure that includes two female figures that act as architectural support for the intricate tiled mosaic which depicts a woman holding a garland. Above her head in Latin is the phrase “The house at it’s threshold gives evidence of the master’s good will.” Well that’s telling of the owner, isn’t it?

The Vanderbilts were known for their garishness, over-the-top opulence and extravagant spending – they were beyond fancy. And this mantelpiece is a good reminder of just how extravagant they actually were. It’s also one of the few remaining structures from the famous 5th Avenue mansion.

I like to think I went to a party or two at the Vanderbilts in a past life. In fact, I’m pretty sure I did.