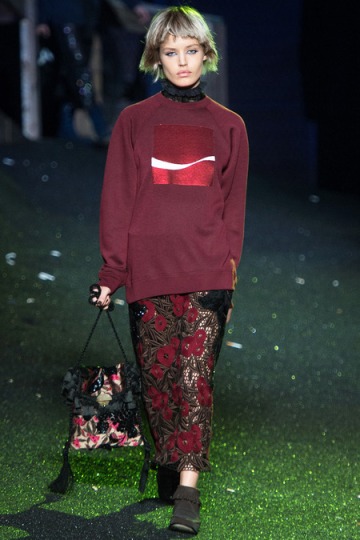 Leave it to Marc Jacobs to do something different from almost everyone else at NYFW for spring 2014. While we saw 90s minimalism over and over, Marc comes along and brings something totally different to table. In typical Jacobs fashion (no pun intended), he used the runway to help tell the story of his inspiration (which I didn’t really get – like the whole collection). Most of the clothes were embroidered, heavy and tasselled. The shoulders of the blazers were extra wide and the shorts kind of looked like skater shorts made for skinny teenage boys. But Marc does whatever he wants – sometimes it’s great and sometimes it’s just odd. This collection did include a few pieces that are going to be sought after, like a few of the embroidered jackets and sweaters and the interesting beaded dresses that closed the show. And as if the sweatshirt-over-the-evening-dress look (the one that looked like a coke can and could be purchased at Urban Outfitters) isn’t going to be super popular with the fashiony New York kids that populate the Lower East Side.