Claudia Schiffer (one of the original supermodels) lives in a castle. Of course she does. And whenever legendary models and interior design collide, I feel it’s my duty as a design and supermodel-loving fan to cover it. After all, when I was younger, my wonderful dad used to buy me Vogue and Architectural Digest (AD) every month. I’ll never forget the day he came home with the AD issue featuring Cindy Crawford in her impressive Madison Avenue pad in 2001. Now Claudia’s centuries old English countryside Tudor mansion is featured in AD’s special fashion-related September issue.

Built in 1574 and officially named “Coldham Hall” (all fancy old English mansions have formal names), the house has 14 bedrooms and sits on 530 acres. It owes its name to Queen Elizabeth who came up with the name when she was served cold ham there years ago. When Schiffer and her husband, film director Matthew Vaugh, purchased the Tudor mansion on a whim (only the fanciest people can buy a castle on a whim…), it originally served as their weekend getaway outside their London home but the couple and three kids moved there full-time a few years ago.

Even though it dates back almost 500 years, the manor has been carefully restored over the years and is now filled with a tasteful mix of antiques and an incredible – and I’m sure very expensive – contemporary art collection including works by artists like Andy Warhol and Damien Hirst. Apparently, the house is also haunted and but the ghosts are friendly so they’re welcome (this just gets better and better).

After reading the article, I had the most brilliant thought. Claudia invites her old friends, Cindy, Naomi, Linda and Christy to Coldham Hall and they do a big Vogue editorial in all the latest couture. If that’s not a good idea, I don’t know what is. 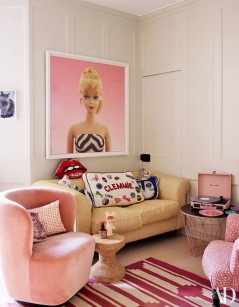 Check out Cindy Crawford’s fancy Mexican villa featured in AD in 2013 here. Fun fact: they sold it in 2016 for 50 million. Why this is not my life, I’ll never understand…