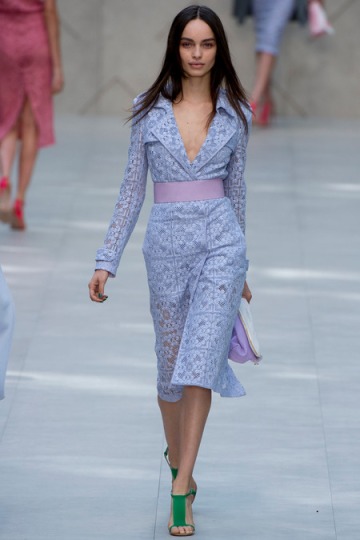 Like Antonio Berardi’s spring collection, Christopher Bailey chose to use light colours (mostly pastels) for the Burberry Prorsum spring collection. It was an original choice of colours considering the frequent use of black and white we’ve seen so far this season. Bailey featured a lot of lace and sheer fabrics (which will only be popular with a very select group of people) but he also included some super good looking draped skirts and dresses paired with flowing knits and jackets. Most of the coats were less structured than we’ve seen from Bailey in the past so it felt fresh. And the stripe and polka dot pieces were strong, especially when paired together, but they seemed a little out of place – hopefully it’s just a taste of what we might see more of in the fall. One thing’s for sure – the plastic cape at the end on model-of-the-moment Cara Delevingne (below) will have many Burberry lovers talking and will get a lot of editorial coverage.