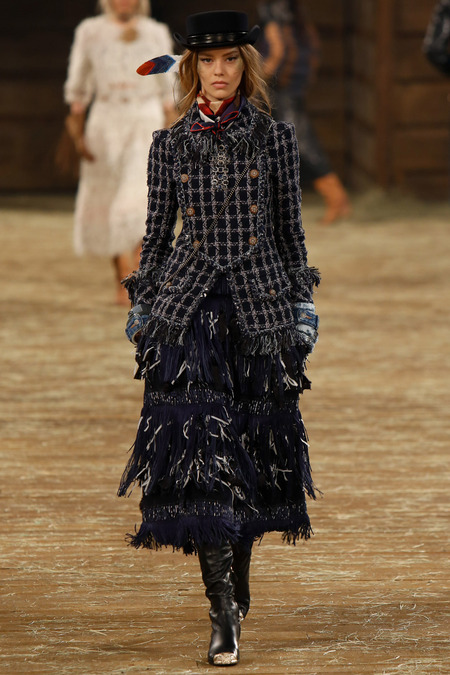 Cowboys and Controversy at Chanel’s Pre-Fall Show in Dallas 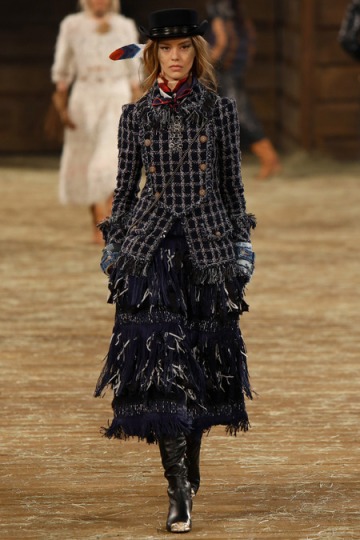 Last year, it was fancy plaid at a castle in Edinburgh. And for this year’s Pre-Fall show (a couple of weeks ago), Karl Lagerfeld chose to show in Dallas, apparently as a thank you to Texas-based Neiman Marcus for supporting the fashion house after WWII. It was an American and western inspired collection presented in a barn-like setting reminiscent of a vintage rodeo. The collection consisted of pieces resembling fancy cowboys and cowgirls, but also included Native American inspired headdresses, which proved to be somewhat controversial. Chanel later released a statement saying that the collection was a tribute to the cultures that are such an important part of Texas history and apologized if it offended anyone.

I think the issue is more about the appropriation of the “Cowboys and Indians” theme that’s bothersome. And if groups have been offended and hurt by similar representations in the past, why keep doing it? Unfortunately, because of Lagerfeld’s status and influence, few will likely publicly criticize him over it. As far as the clothes go, although the collection included a lot of tweed and some great accessories and handbags, it wasn’t a dressy collection and will now likely be more remembered for the controversy it garnered as opposed to the clothes. But it was nice to see a few runway stars like Erin Wasson, Crystal Renn and Stella Tennant strutting down the runway. And as often happens when Chanel focuses on a concept, we’ll likely see more of the’ fancy cowboy’ look in 2014.  Images via style.com.