Some Favourite Red Carpets Looks of 2014

The end of 2014 is quickly approaching and that means it’s time to look back on some of the year’s best looks. And it was a good year for fashion lovers. There were tons of fancy events where stars majorly stepped up their style game. It was all about confidence where many chose to make statements with brave and exciting looks. We saw trends including vintage-looking regal dresses, major embellishment and detail, 80s glamour, menswear inspired pantsuits and looks that were modern, sexy and edgy. And Lupita Nyong’o, Amal Clooney and Cate Blanchett were definitely the style stars of the year (all receive multiple mentions on this list) . While not all the looks below were technically on red carpets, they were all equally as memorable. Looking forward to seeing the many fancy ensembles we’ll  see in 2015. Happy New Year!

This dress will be on many best-of-the-year lists. And it’s the one that put the smart, gorgeous and talented star on the fashion’s world map. It was high on drama and the colour was incredible. It was similar to Gwyneth Paltrow’s legendary Tom Ford gown at the Oscars in 2012 but Lupita made the look work for her. 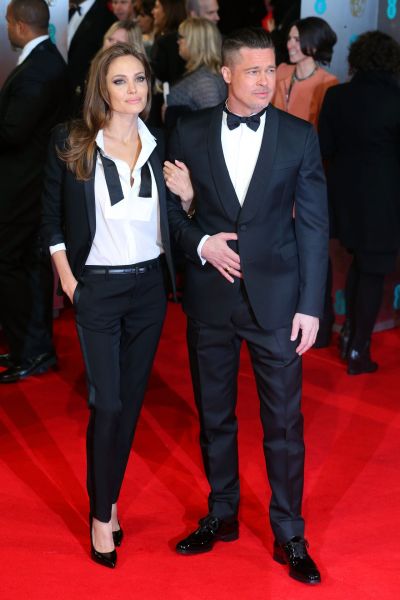 Everything about Angelia’s look was steller. It was chic, modern and sexy (and she and Brad matched). Yves Saint Laurent was famous for evening pant suits and tuxedos for women and I love that it came back big time this year. It’s a timeless look and a nice change from long formal gowns. Angelina’s hair, make-up and minimal accessories were perfect too.

The cut on this dress was incredible – loved the draping around her hip. Such a timeless and classic look. And I loved that it was McQueen. A movie star could have worn this dress in 1952 and it looked just as beautiful on Sandra as it would have back then. Midnight blue was also a cool way to do something other than black. 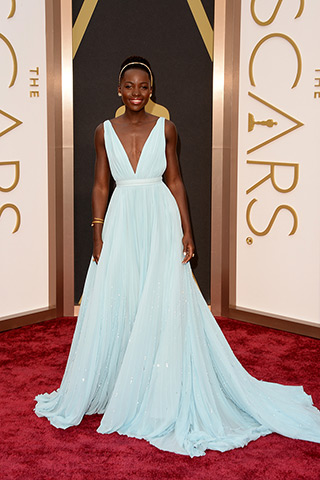 This custom “Nigerian blue” Prada dress was lovely – feminine and reminiscent of a fairytale. It also moved beautifully. When I first saw her on the red carpet, I wasn’t in awe of the dress – until I saw how she moved with it. And the pleats were unforgettable. 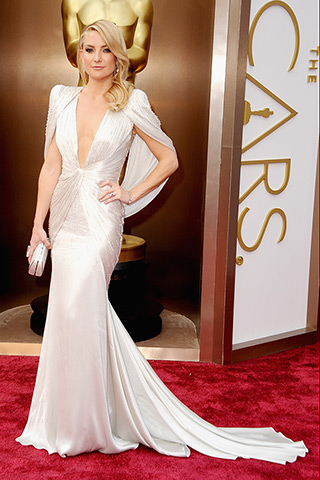 This dress reminded me of something Joan Collins would’ve worn on a classic episode of Dynasty. It was super 80s glam, which is always good. It was dramatic and luxurious, which makes for an awesome combo. 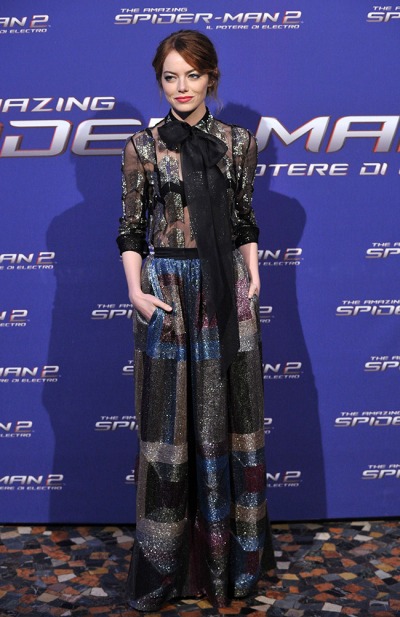 Stone nailed many looks on the red carpet this year. And this love this look from Valentino’s Pre-Fall 2014 collection was my favourite. The beaded sheer blouse tied at the neck paired with the shiny patterned skirt had a major 70s vibe. The whole look was almost irreverent. It was pretty much made for Carrie Bradshaw.

Rihanna in custom Stella McCartney (May)

Rihanna isn’t shy and that quality is definitely reflected in how she dresses. And while her sheer crystal embroidered custom dress she wore to the CFDA awards will not soon be forgotten, I loved this white two-piece white ensemble she rocked at the Met Gala. It was chic, fresh and sexy – perfect for an edgy dressing pop star.

Cate Blanchett in Givenchy (May) 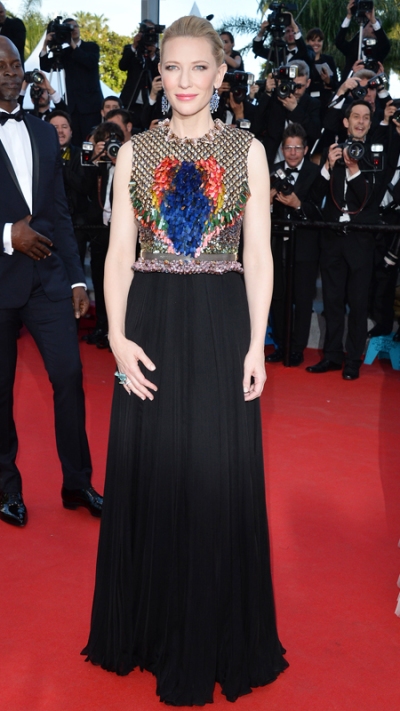 Blanchett’s multi coloured Givenchy gown was definitely one of the Canne’s fashion highlights and one of this year’s most interesting looks. The embellished beaded bodice was like artwork and was nicely balanced with solid black. And it worked so well with the blue chandelier Chopard earrings (Cate totally rocked many long earrings his year).

Cate Blanchett in Ralph Lauren (May) 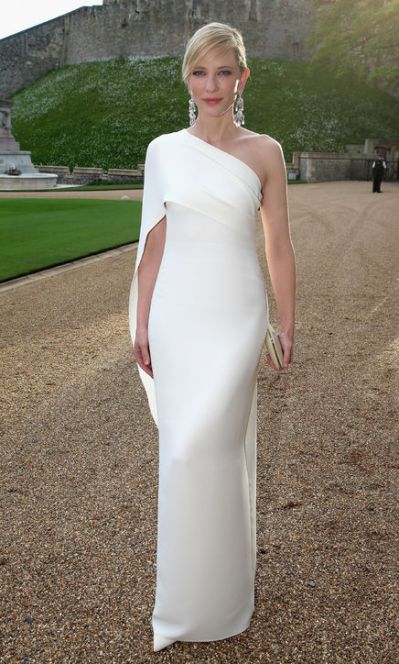 Blanchett wore this lovely and chic one-shoulder gown to a dinner at Windsor Castle. And it couldn’t have been more perfect. It was super regal yet soft and she was styled perfectly with a simple clutch and long rock crystal chandelier earrings. She looked VERY fancy. 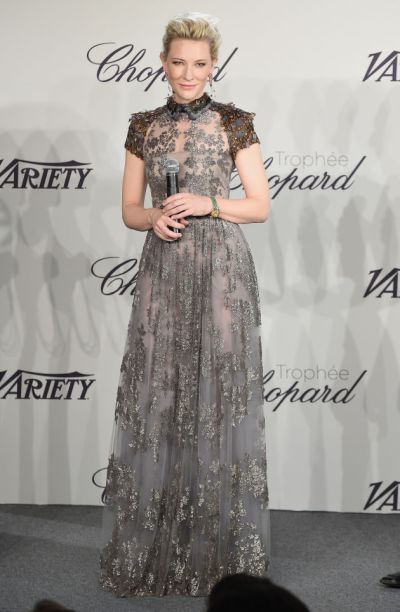 Another stunning and totally beautiful dress on the fashion forward actress. This was such a regal look. The combination of silver embroidery, feathered collar and gold cap sleeves was super elegant and majestic. I would loooove to see this dress up close.

Blake Lively in Gucci Première (May)

This Gucci Première dress had a huge impact and was timeless and elegant. There was a Grace Kelly vibe to the overall look and it also reminded me of the Valentino dress Julia Roberts wore when she won the Oscar in 2001. The red lips and stricking and stunning diamond necklace were also a nice touch.

Jane Fonda in Elie Saab (May)

Once again, Fonda was ageless in this red and silver beaded gown. And what makes this one of the year’s best is Angelina Jolie wore the same dress (in a different colour) to the Oscars earlier in the year (check out the side by side comparison) and at 76, Jane totally rocked the look. Few other women would ever be brave enough to wear the same dress as Angelina Jolie – but Jane Fonda is one of them.

Amal and George Clooney definitely had the wedding of the year. And her fashion choices for the extravagant event were legendary. For the pre-wedding dinner, she wore and incredible custom Alexandre McQueen dress with a dramatic train that was super glamourous and couldn’t have been better suited to the dark-haired stunner (the dress also reminded me of a similar Alexandre McQueen gown Michelle Obama wore to a state dinner in 2010). And it looked so fancy when friends held the train for her as she got on the water taxi. 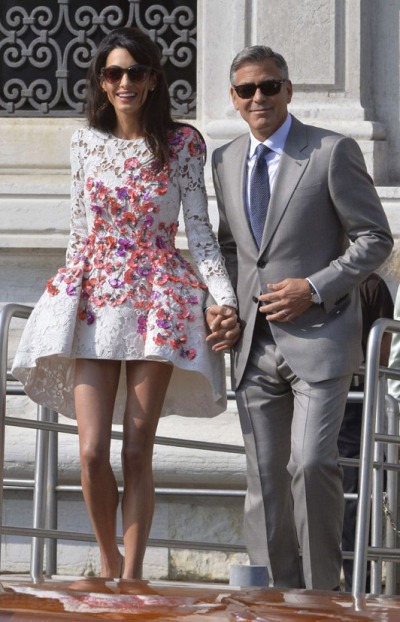 Following the wedding, the stunning bride stepped out in a show-stopping totally beautiful cream colored lace Giambattista Valli couture dress, embellished with pink floral detail and which showed off her long legs. It was a beautiful (and very appropriate) choice to wear the day after one of the fanciest parties of the year. 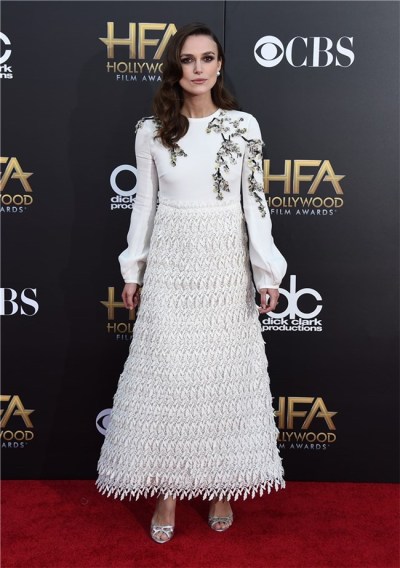 Knightley always manes interesting red carpet choices and this one was definitely one of the most beautiful dresses of the year. It was feminine and soft and impeccably made. And the floral embroidery and the intricacy of the skirt was perfection. Dresses like this are like art.

Banks red carpet wardrobe promoting the latest Hungers Games was outstanding but this incredible Elie Saab gown was breathtaking. The colour combo was exciting and the cut was super over-the-top glamourous. Elizabeth Taylor would have worn this dress in her prime. That’s how awesome it was.