Awards season is now in full swing and continued on Saturday with the SAG awards. Like the Golden Globes, there’s less pressure at the SAGs so it seems like stars are often willing to be a little more daring in terms of their style choices, and this year was no exception. That’s a good thing for fashion lovers because it’s red carpets like this that make it more fun to watch, analyze and think about. 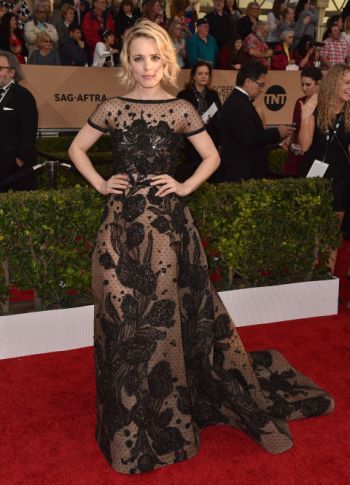 McAdam’s semi-sheer short sleeve back floral patterned look was young, fresh and cool – not qualities we often associate with Elie Saab. But the proud Canadian actress rocked the whole look. Loved the way her hair was styled too.

Moore always makes for good red carpet watching. Whether you’re a fan of her choices or not, she knows how to make a statement and gets people talking – like this sparkling light green Givenchy Couture gown (that was very recently on the runway in Paris). The colour is refreshingly different and I loved the way it shined. But I’m not sure the cut worked. Still, kudos to Moore for making interesting choices when it comes to her style.

Definitely one of the night’s more polarizing dresses. Most fashion insiders loved this sparkly mixed-metal colour blocked column gown. And I’d have to agree. Like Julianne Moore’s dress, this was an unexpected fashion forward choice that definitely stood out from the rest. Sophia Vergara would NEVER wear this dress but I could totally see Rihanna in it. And that’s a major compliment. 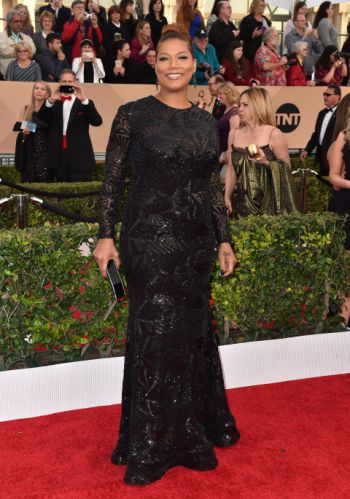 The best best Queen Latifa has ever looked on the red carpet. Loved the long sleeves, the cut and the material. It’s a good looking dress and she wore it well. She also looked comfortable and confident which is always nice to see. 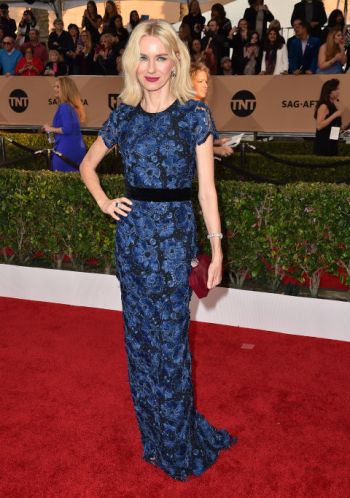 Another good looking dress that doesn’t scream “ME ME ME.” The midnight blue floral lace fabric works perfectly with the black belt and I love the way the whole look was styled. It shows how well short sleeves can work on a formal gown. This was a well-played red carpet moment for Watts. 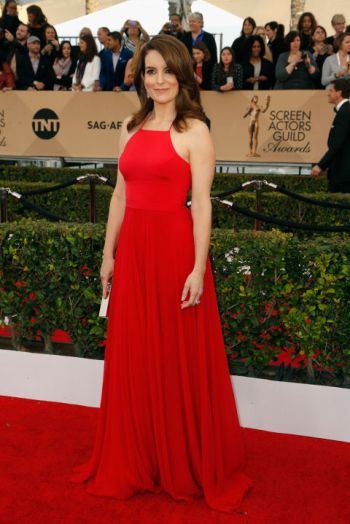 Fey always makes me smile. She’s hilarious and clever, and she seems a lot more comfortable the last couple of years on the red carpet, especially when she’s in the right dress. The cut is perfect on her and the dress moved beautifully. I think the effect of it being two pieces is interesting as well. Thumbs up.

I feel like if Kidman wore this dress years ago when she was at the height of her fame ten years ago and could pretty much do no wrong when it came to her red carpet style, everyone would have loved it. Although it wasn’t on many people’s radar, I liked it – it’s fun and very 70s/Studio 54. It’s one of those looks that doesn’t take itself too seriously, which is always appealing. I also loved the layered necklaces – that’s some good styling.

So many people freaked out over the exposed bra for a woman her age, which I thought was lame. It’s not about her age, it’s just not a great look. Especially the pants. Look at the way they fit at the bottom. I always love the idea of a suit of a red carpet but considering she’s a Hollywood legend, I think she could have done way better. 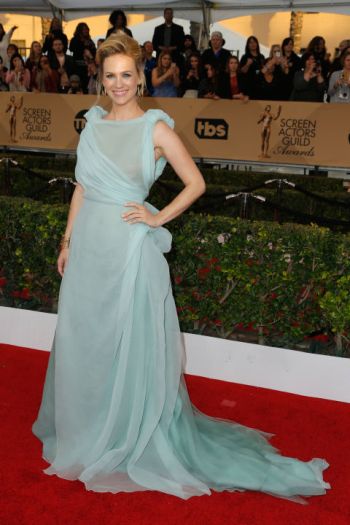 Where do I start… Schiaparelli makes some incredible gowns, often ones that are museum quality. But the execution of this didn’t work for me. At all. There’s way too much going on and it’s totally overkill for the SAG awards. 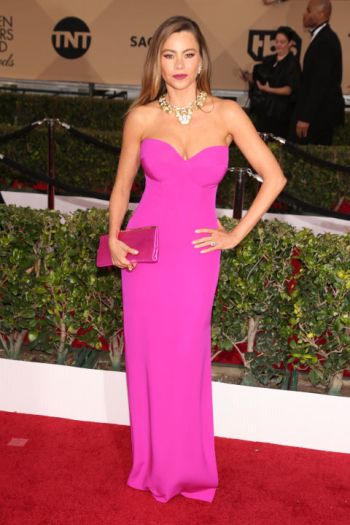 Once again, it’s always the same on Vergara. Same cut, came cleavage, same everything. But to be fair, she knows what works for her. And the colour is lovely. Also, THOSE ARE GREAT BOOBS. And I’m not even into that.

I’d have to call this one of the more disappointing looks of the night. Larson is on top of the world and will likely win the Oscar and this felt all wrong for her. It was also recently on the runway at Paris Couture Week but it looks like it’s intended more for a Vegas cocktail server at some “classy” (HATE that word) casino. And those shoes should be retired. Forever. Let’s hope Larson and her stylist nail it at the Oscars.

Hmmmm. So she was obviously going for a Marilyn Monroe look but doesn’t it feel like this is a little much? Hendricks is so beautiful and has an amazing figure but this felt way too ‘try’ to me. I’d love to see her in something this one day (Alexander McQueen – Pre-Fall 2016).

Looking forward to more award red carpets as we approach the Oscars at the end of the month. I love this stuff!

All Photos via harpersbazaar.com. Check out the site more.