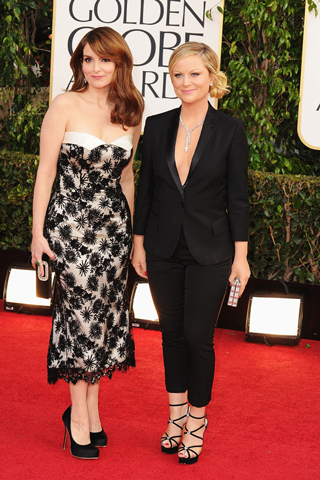 The best award show hosts in a very long time! They completely nailed it. People were cracking up every time they were on stage – such fantastic comedic timing together. As hosts, they were charming, clever and hilarious. I just wish they were on more of it. Tina and Amy both looked awesome as well. Pretty dress on Tina and Amy sure rocks a sexy Stella McCartney tuxedo. Well done ladies. I sure hope they host again next year.

My favourite – love this whole look. Super glamorous and so sexy. The black and gold dress was definitely one of the most unique of the night and fit the actress perfectly.  So striking. The gold leaf embellishment on the belt and the gold collar detail is so great. And the plunging keyhole neckline isn’t too much because of the long sleeves and there’s no slit. A lot of people on Twitter said she looked like Goldie Hawn’s character in Overboard – which is awesome!

Second favourite. A super good looking back and white streamlined dress made especially for her. Very architectural and sleek. She said she needed a dress so she called Tom herself and asked him to make her one. Love the open back and the way the white is incorporated into the dress. Her accessories are also perfect – super sexy shoes and love the Bulgari chandelier earrings and the snake wrap bracelet is amazing and probably very, very expensive.

When I first saw this I thought it was simple and pretty. Love her short hair and I even kind of liked how simple her accessories were (small diamond studs). But then as I continued to see her through the night, I thought it was too simple – like a little boring. I’m sure she’s holding back and will plan something major for the Oscars. 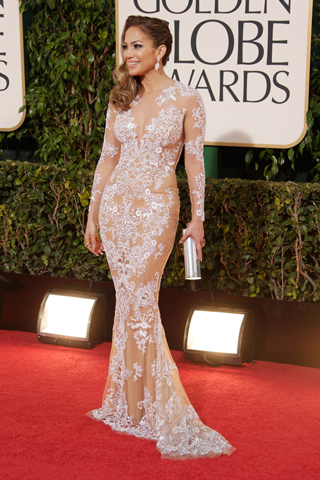 We’ve totally seen her in this look before – like at the 2011 American Music Awards. And Jennifer Lopez is for sure the girl who would wear white to her friend’s wedding. It wasn’t her year to stand out or shine but she sure tried. And the sheer fabric looked liked something you’d see on Dancing with the Stars. Or on a figure skater. And I think she needed red lipstick. Not one of her better looks. 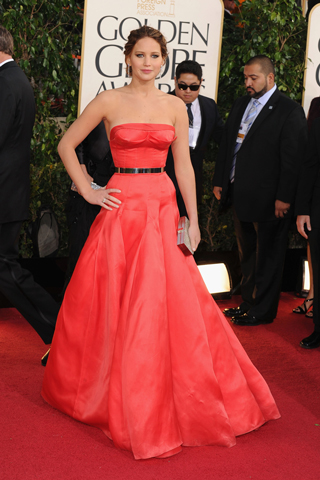 I love what Raf Simons has been doing at Dior but I’m not sure about this one. It’s odd around the boobs and not very flattering. I get the 50’s reference but don’t think it’s working on Jennifer Lawrence (who seems pretty funny and down to earth). It was a cool belt though. The belt on Marion Cotillard’s dress (also Dior Haute Couture) looked like the same one.

This was definitely one the dresses people loved or hated. And she knew it was going to be a statement dress. I didn’t like it – it looked like fabric on a couch in a Park Avenue apartment in 1978. But I heard it was really beautiful in person. And the pockets were cool. 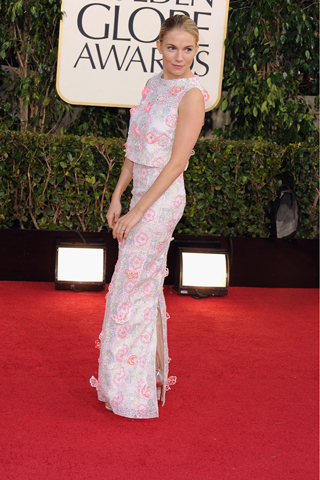 Leave it to Sienna to wear something like this 60’s inspired creation. Erdem is a really cool line and known for elaborate fabrics and patters. And Sienna is known for being fashion forward and doing her own thing but this one just doesn’t work. The floral embroidery is odd and it’s not flattering. It’s also not a good colour on her. She’s a beautiful girl but this seemed more like a costume. And it didn’t hang nicely when she was on the carpet. Next time Sienna.