As the year comes to end, it’s time to reflect on the many fancy red carpet looks we saw throughout the year. There was everything from simplicity to all out glamour, from ready-to-wear to couture. I don’t have one ultimate favourite look of the year but I’ve included some of my top choices below (in no particular order). And of course I had to include Cindy Crawford. Because, well…d’uh. Here’s to a happy, safe and fancy 2014. Happy New Year!

Kate Hudson in Alexander McQueen (January) Kate looked better than ever at the Golden Globes in this black and gold embellished dress. It was glamorous, sexy and fit the actress perfectly. A lot of people on Twitter said she looked like Goldie Hawn’s character in Overboard – then I loved it even more.

Jessica Chastain in custom Armani Privé (February) This was old Hollywood glamour and a very good choice for the Oscars. The detail, the beading and fit were impeccable. Her hair and make-up are lovely too – very Veronica Lake.

Charlize Theron in Dior Haute Couture (February) My favourite look this year at the Oscars. It was chic and good looking. And the fit was outstanding. Although it’s hard to tell by the photo, the top was beaded. It was a super simple yet a glamorous look – this was refined elegance. 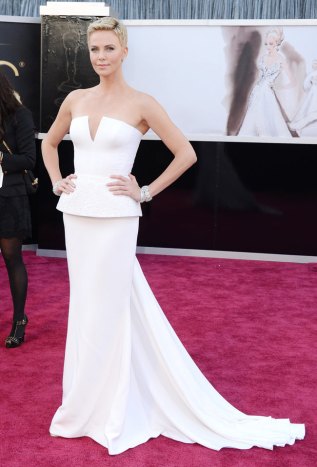 Rihanna in custom Azzedine Alaia (February) The singer looked incredible in this custom Alaia red dress at the Grammys. The fit and cut were perfect. This dress managed to be both elegant and sexy – which isn’t an easy task. Her hair looked great as well.

Rooney Mara in Givenchy Haute Couture (May) The detail on the dress was super impressive – the cut, the fabric, the zippers all worked well together making this was one of my favourite looks this year at the Met Gala. Also loved the dark lips, lack of jewelry and white ankle strap Givenchy heels.

Nicole Kidman in Christina Dior Haute Couture (May) It was no shocker that Nicole would stun at Cannes Film Festival. And this dress was incredible. The detail and bead work were amazing, and it was a great length. Her makeup was also lovely. The pink patent Dior heels were pretty chic too.

Cindy Crawford in white Roberto Cavalli (May) How can I not include Cindy on this list?! The legendary supermodel looked incredible in the long white gown at the Cannes Film Festival. The New York Times later said Crawford delivered the most jaw dropping red carpet performance of the whole film festival. After all these years, Cindy’s still working it.

Gwyneth Paltrow in Lanvin (September) The star looked beautiful in a white Lanvin dress in September. It was a feminine and flattering look. While the dress had a bit of a retro vibe, the cut and length were super current. The minimal accessories and very cool ankle strap heels kept the look modern and clean, and the vibrant red lips added a pop a colour. 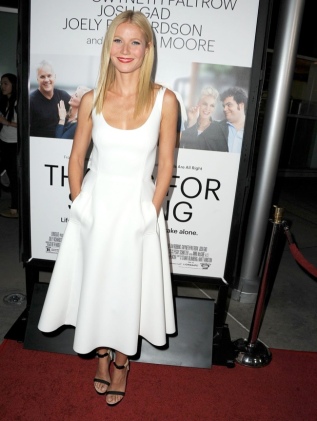 Gwen Stefani in Ferragamo (October) Stefani rocked this silver fringed gown at the Wallis Annenberg Center for the Performing Arts Inaugural Gala. And it suited the style-progressive singer super well. Not many could pull off a dress like this, especially while pregnant, but Stefani does it effortlessly. A super unique and charming look.

Diane Kruger in Chanel Haute Couture (November) The fashion forward star looked beautiful in a chic embellished little black strapless dress at the Chanel Little Black Jacket Event in Sao Paulo. The dress was a modified version of one from the fashion house’s spring 2013 haute couture collection. She completed the look with simple black-ankle strap sandals.

Julianne Moore in Tom Ford (November) I loved the embellished dresses when I first saw them in Ford’s spring 2014 collection. They’re super chic and very expensive looking. And the red version couldn’t have looked better on the talented actress at the at the CFDA and Vogue 2013 Fashion Fund Finalists event. Once of Moore’s best (and coolest) looks of the year.