Like the Oscars and the Met Gala, the red carpet at Cannes has an aesthetic quality unique to the event – basically unbelievably expensive and opulent clothes. When it comes to fashion and jewels, there’s no subtlety on the French Rivera. Now that the year’s most over-the-top excessive film festival has wrapped, it’s once again time to look back on the dozens of incredibly fancy and opulent looks. Many stars blew me away with their gowns but there were a couple that were surprisingly underwhelming. I guess there’s always next year.

I thought this powder blue gown was fresh and pretty, and likely representative of what we’ll see more of from Gucci, now under the direction of new creative director, Alessandro Michele. The combo of the camisole-style top half and the long flowing skirt had a free-spirited 70s vibe that suited the actress. And I’m a big fan of the length of her hair and the braided pieces at the front.

This dress couldn’t be more ‘couture’ if it tried. It’s incredible. And it was perfect for Cannes. It’s what the film festival is all about – excess. The feathers combined with embellished bottom half worked surprisingly well together. And don’t get me started on those emerald Chopard earrings – they’re killer. The whole look had a 80s Yves Saint Laurent couture vibe.

Blanchett is so regal and she exemplifies it effortlessly. This black plunging v-neck dress was chic and super striking. The beading embellishment was interesting and loved how it was black on black. And how great was the sash tied at the waist? This was Armani at his best. Also, the two large gold cuffs were the perfect accessories (I’m a huge fan of the double cuffs).

Another dress, not unsimilar to Moore’s Armani Privé, which was pretty much made for Cannes. It was luxurious and beautifully constructed. Loved the idea of the short sleeves and the pockets – great details on such an opulent dress. And the material of both the top half and the skirt was outstanding. Also, the Elizabeth Taylor-style diamond pendant necklace was a nice touch.

Nyong’o was definitely a welcome addition to the red carpet this year at Cannes. She always has such a lovely vibe. The way she moved with the dress was a moment. No one else could have worn this dress as well as her. And the flower crystal detail around the neckline and along the waist was especially pretty.

Jane Fonda is on my best dressed list pretty much every time she makes an appearance on the red carpet. She’s been wearing Versace for years and this electric blue was a striking colour on her. What else to say? She’s incredible. Have you seen her on the latest issue of W Magazine?! I really want to be her friend.

Like I frequently say about Blanchett, many of the dresses she wears on the red carpet could be at the Met Costume Institute. In fact, one year Anna Wintour should make Blanchett’s clothes the theme of the Met Gala – seriously. Only someone that truly gets high-fashion and couture would be brave enough to wear this dress. It’s a piece of art. And Blanchett wore it beautifully.

This was hands-down one of the coolest dresses Miller’s ever worn. And one of my favourites of the whole festival this year. That cape! That crystal neck piece! The sheer fabric! Those stars! Everything about this look was cool. And only a person in the know would rock Sonia Rykiel so well. Her hair was also perfection. A spectacular and dramatic look.

While I prefer the opulent black and grey Armani Privé gown on Moore, this was still a very cool and unique dress. Also, it looked expensive. The velvet combined with the alligator patterned leather was luxurious and super fancy. She’s been a big fan of Givenchy Couture lately and I likely how different this was from what we’ve seen her in previously. The dress also moved beautifully too as she moved effortless across the red carpet. 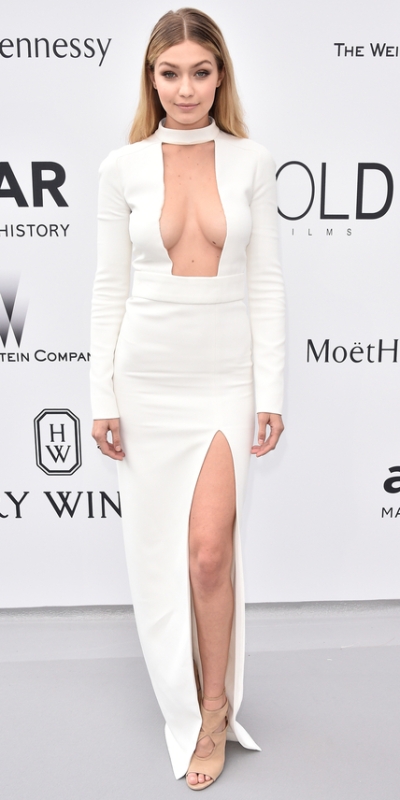 Love Gigi Hadid. She’s one of my favourite models to watch. She for sure has that ‘it’ factor. And she seems cool too. On most people, this plunging Tom Ford dress would be unfortunate but it’s awesome on her. Loved how she kept the hair and makeup simple and the lack of accessories (the boobs were accessory enough).

Everything about this dress – the cut, the colour, the fabric, the sleeves – is perfectly suited to for Cannes. And the well-known model wore it flawlessly. This was old- Hollywood glamour done well. Not to mention that unbelievable diamond Boucheron necklace. That’s one fancy piece of jewellery. And well-played with the Veronica Lake-style hair.

This look on Stone was one of the few misses for me this year at Cannes. She was one of the stars we were most looking forward to seeing at the film festival this year – especially when she’s so fresh and often takes risks on the red carpet. Obviously there’s nothing unfortunate about it – it was just kind of blah. She doesn’t even look that happy to be wearing it.

Another look I thought was more on the disappointing side. Theron is so stunning and has unstoppable presence. But there wasn’t much that was spectacular about this dress. Especially for Cannes. Remember the black sheer pleated Dior Couture dress she wore to the Snow White and the Huntsman premiere in 2012? It was ravishing. And more along the lines of what I was expecting.