The MTV Awards are definitely not what they used to be. But last night’s show did receive a lot of hype. If you caught some of it, you know what everyone is talking about this morning. And it’s not the NSYNC reunion. If Miley’s whole act was purely to get everyone talking today, then she definitely accomplished her goal. But if her performance was intended to be fun and sexy then she should be very, very embarrassed today. I felt awkward watching it at home – can you imagine if you were actually there?! Now on to the clothes…

I’ll be honest and say that for the most part I’ve been liking Miley’s style lately. She’s been looking young, fresh and fun (except for those horrible sweat-pant/jeans she wore a while ago). But I’m totally not into her look last night. It was vintage Dolce & Gabbana. It’s too bad because when it comes to vintage Dolce & Gabbana, there are thousands of looks she could’ve chosen that would have been way cooler than this. It’s just bad. As the legendary Michael K from Dlisted would say “What In The Hell Kind of GD Outfit Is This?!” 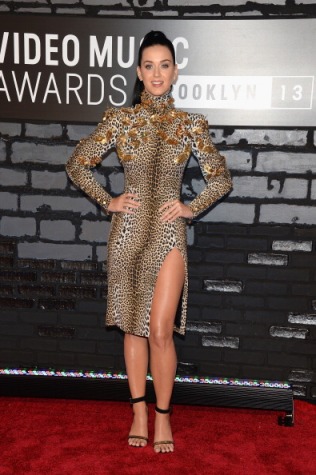 Perfect for the MTV Awards. If it looks familiar, it is – Coco Rocha wore a longer version of the dress to this year’s Met Ball. Yes, it’s maybe a little predictable when her new single is called “Roar” but it works. The side slit balances well with the long sleeves and the gold embellishments around the neckline add to the drama. It’s a good look on Katy. And love the gold and black Celine ankle strap shoes. The dress is from Emanuel Ungaro’s Fall 2013 collection, which I really liked. And I’m pleased the brand is coming back with Fausto Puglisi at the helm because the fashion house has a great legacy.

I like when Lady Gaga tones down her look a bit but not sure it worked last night on the red carpet. Prabal Gurung is super talented but don’t think this dress was the best choice for this occasion. Maybe on someone else at a different event, it would have been really cool. But what’s with the really fake wig? It’s awful and distracting. But the tough thing with Gaga is you never know if it’s on purpose or not. In fact, it probably was and I’m just not sophisticated enough to get her brilliance. 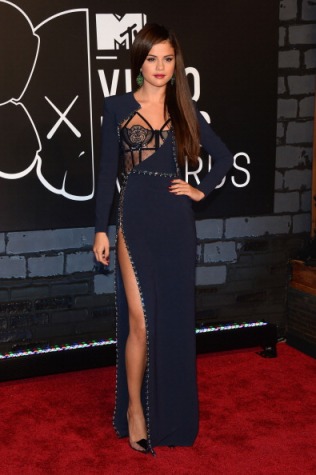 Another example of how Donatella just doesn’t have Gianni’s brilliance as a designer. If he designed this dress, it would have been better. Gianni knew how to stop just before it was too much. Donatella doesn’t have that skill. It’s good colour though. And Selena is a beautiful girl. Love the red lips and emerald jewelry. 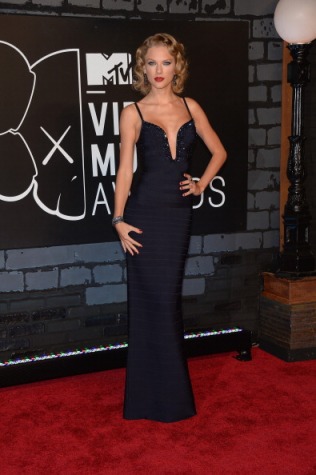 This is kind of a yawn for me. And Herve Leger seems so Kardishian now. I get Taylor Swift tries to be responsible when it comes to dressing for her fans and doesn’t ever do anything too sexy or over the top – which is cool – but it seems like she doesn’t have any fun when it comes to fashion. Like, loosen up a bit. Somehow I have a feeling that’s never going to happen.

Model Erin Wasson. Alexandre Vauthier Couture. MTV Awards. Why not? And how awesome would it have been if Taylor Swift showed up in this?! I’m giggling just thinking about it.