A day before the Grammys, I posted on Facebook that I was excited to see what the stars will be wearing and I knew we’d see some looks from the Spring 2015 couture shows that just wrapped up in Paris. I predicted we’d see Alexandre Vauthier, Versace, Zuhair Murad and maybe Jean Paul Gaultier (if we’re lucky). And we definitely did. Miley Cyrus wore Alexandre Vauthier, Gwen Stefani rocked Atelier Versace, Katy Perry wore Zuhair Murad and a Kardashian wore Jean Paul Gaultier and all the looks were straight off the runway. But we all know the one dress everyone is still talking about it…and probably will for some time.

Leave it to Rihanna to wear the most polarizing dress we’ve seen in a long time. And she totally knew that everyone would be talking about it today. It’s also straight off the runway from the couture show in Paris. On the in hand, it’s kind of ridiculous but on the other hand, I liked it. It’s cheeky. And it works because it’s her. She’s brave and has an irreverent attitude when it comes to many of her red carpet looks. And it’s stars like Rihanna that make watching fashion on red carpets fun. Sure, it was over the top but it was also different and kind of exciting. Taylor Swift would NEVER be brave enough to wear this dress. And I don’t think she’d get it either. I say well played, Rihanna. I also have to give a shout-out to her incredible over-sized black suit she wore while performing. It was one of the best looks of the night. 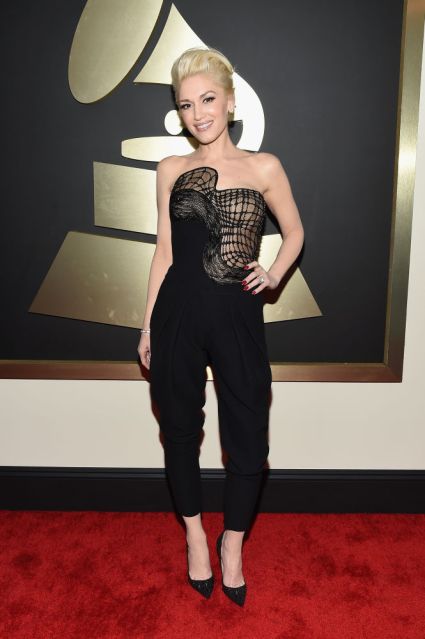 This was one of the best of the night. I knew we’d see some looks from Atelier Versace’s latest couture show and Stefani rocked this jumpsuit on the red carpet better than the model did on the runway. It suited Stefani so well that it looked like it was designed with her in mind. It was also interesting, sexy and a little wild. And I like that she kept the rest of the look relatively simple with her hair softly tied up and minimal accessories. A nice juxtaposition for such an outfit with such an impact.

This is a little too ‘try’ even for Madonna. She’s been doing stuff like this for years, so it was to be expected but it’s not a good look. It’s kind of silly and not in a cool way. Sometimes it feels like she’s just trying too hard now. And she doesn’t need to – she’s Madonna and she’s a living legend. But I thought she looked awesome preforming.

Totally Sia. But minus the huge wig covering her face, check out that incredible outfit. The cape was stunning and beautifully made. And loved the simplicity of the white cotton shirt underneath and those black heels are killer (I think they’re the same ones she wore when performing on SNL recently. It was a good looking and chic outfit (wig aside). 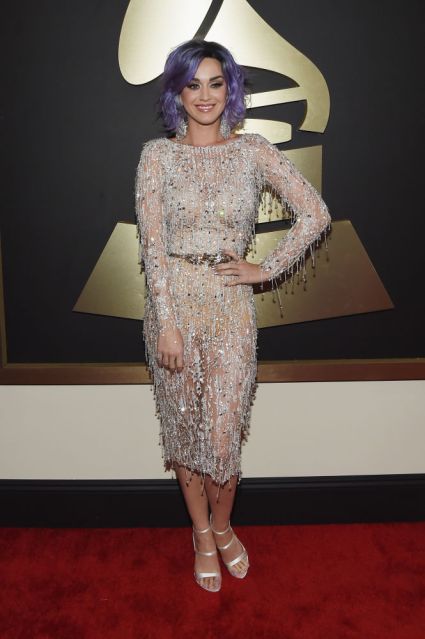 Perry bugs me. And I liked the dress when I saw it on the runway recently so I wish it was someone else wearing because I feel like Perry doesn’t really do clothes like this justice. The dress was glamourous and has a Joan Collins/Dynasty/Bob Mackie vibe. It also kind of reminded me of something Cher might have worn back in the day when she was being less costume-y. And I’m a sucker for huge earrings and these ones were super glam. 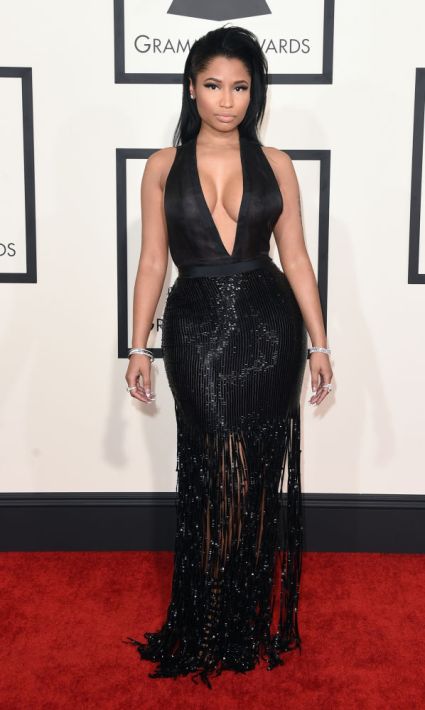 Minaj also bugs me. And she doesn’t seem like she’s very nice. I felt the same way with this dress as I did about Katy Perry’s dress – I wish someone else wore it because it’s a great dress. I loved the beading and the fringe at the bottom. But it would have worked so much better on someone with smaller boobs. Picture it on Julianne Moore or Kate Hudson – it would have been deadly. But it was styled well though. Loved how they kept it relatively simple with the diamond bangles and rings.

I feel like Taylor Swift is a little like Sophia Vergara in that she always looks like she’s wearing the same thing. You can tell she loved playing princess when she was little. And probably always insisted on being the centre of attention. I don’t love this dress but also didn’t think it was the completely unfortunate. I liked that she wore fuchsia heels but the earrings were all sorts of wrong. How – when you all have the access in the word – do you or your stylist end up picking those earrings?! 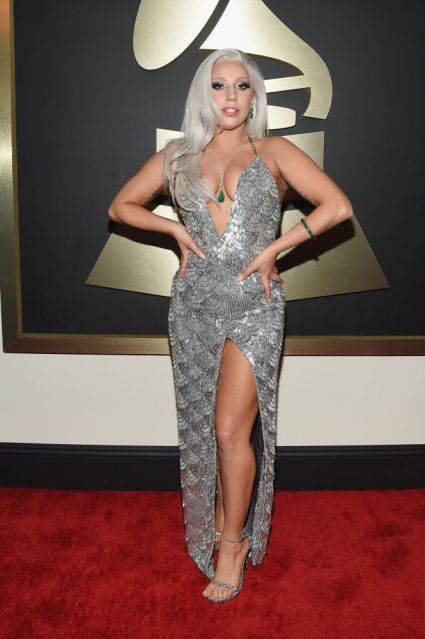 Much like Nicki Minaj, this is way too much boob and the slit is too high. It’s not sexy. It’s just Vegas showgirl. But the emerald jewels are pretty stunning. Elizabeth Taylor would have approved. And at least she seems to be over attention-seeking antics like showing up in egg. 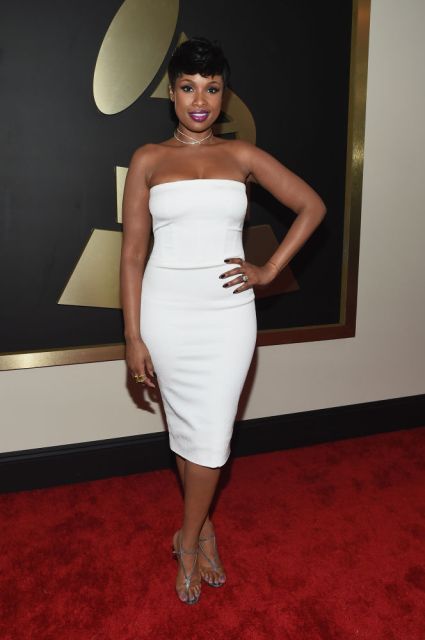 I couldn’t believe this was Tom Ford. It doesn’t look like it. There’s nothing wrong with it but it couldn’t get any simpler. There’s not really any design element to this dress, which isn’t like Ford. And it would have been better paired with a cool jacket or some wild blazer. Super pretty diamond necklace though. And her short hair looks great.

Generally, I love Proenza Schouler and while this was a perfectly nice dress, there’s nothing remarkable about it. The fabric is beautiful and it fit the superstar well but it’s just not that memorable. Queen B can do way better. But her hair sure looked good – very Gisele.

A Kardashian in Jean Paul Gaultier

I really wish someone else wore this Gaultier dress because it’s incredible. Fresh on the runway from his latest couture show, this dress was crazy good. Check out the gold beading and detail on the shoulders, pockets and the cuffs! Incredible. This was fashion. But once again, it would have been better on someone else (anyone else), especially on someone with smaller boobs. If Rihanna wore this dress, I would have freaked. But I’ll admit, I like the shorter hair length. It’s fresh.

So much better than some of the crazy attention-getting outfits she’s worn in the past. The cut-out dress was young and sexy, and it suited Cyrus. Another one that was straight off the runway from Alexandre Vauthier’s recent couture show. But something seemed off with the hair and makeup. She looked like she didn’t feel well.

Practically steals the show! It was exciting typing “Jane Fonda” and “Balmain” together. This legend just won’t stop. She is INCREDIBLE. And kudos for rocking a jumpsuit and looking unbelievable at 77 (although I think I would have liked it better as a long dress). But the colour was striking and that necklace was the best. Imagine how many great things you could wear it with that necklace? Like always, Fonda’s hair and makeup is also perfect. No wonder so many in the industry idolize her. She’s so cool.